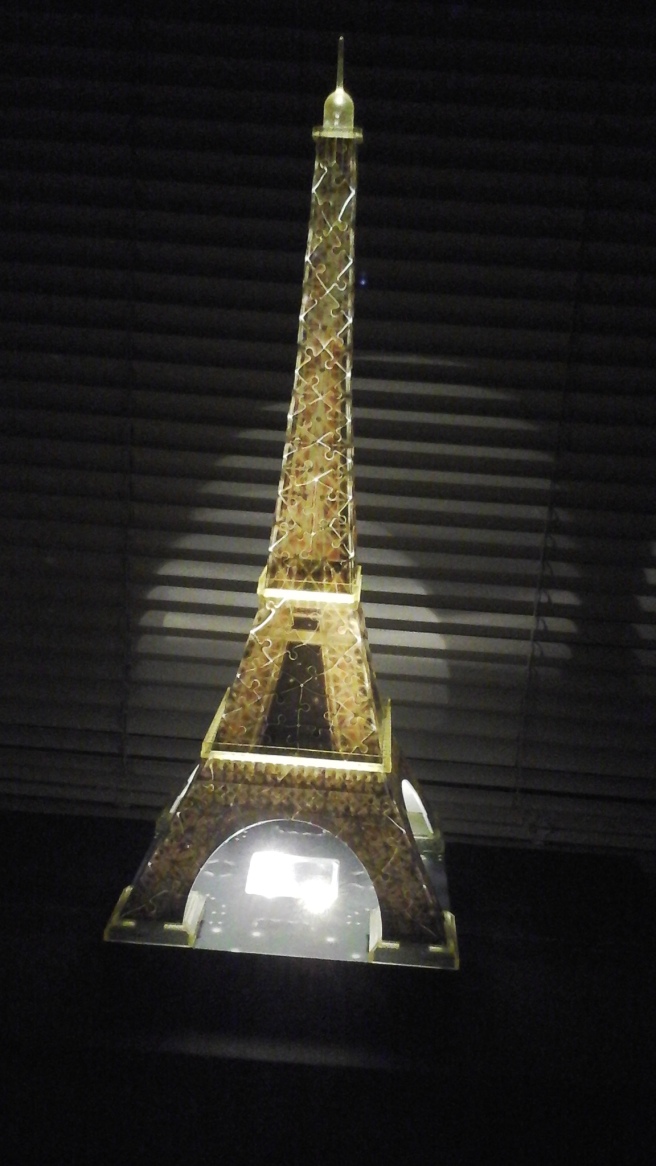 Yeah, I put together a building 3D puzzle. None of the pieces are actually 3D (sort of). It was a bit weird–the back of every piece had a number and which direction the next numbered piece went on. The most difficult part was the edges–I say sort of not-3D because the edges required you to actually bend them, which caused not an insignificant amount of frustration, especially the smaller pieces. In the course of trying to bend them I managed to actually break one of the pieces. But hey, it looks neat. It has lights. This photo isn’t even the end of it.

END_OF_DOCUMENT_TOKEN_TO_BE_REPLACED

Glad that’s over. Moving on!

END_OF_DOCUMENT_TOKEN_TO_BE_REPLACED 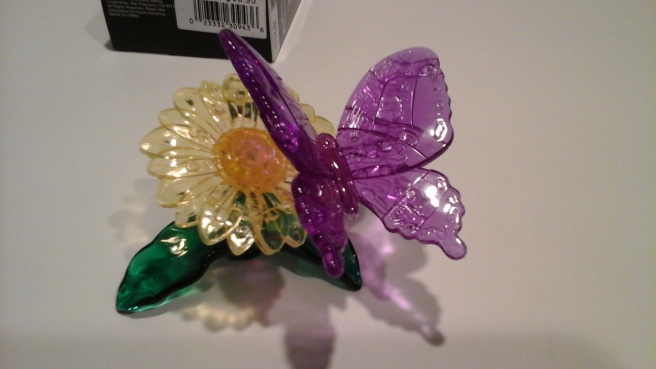 Pretty, right? Pretty ridiculous. Pretty hard. Currently it is sitting on the counter with superglue on it because it does not stay together otherwise. I feel like it’s under ridiculous pressure and gravitational forces and at the slightest touch will literally explode.

The first two puzzles I did–that panda and bird–were challengey, and though there were a few points where I had to squeeze pieces into place, it wasn’t liable to explode (although at one point I had to rebuild the bird, but the pieces were organized so I knew where each one was).

The butterfly was easy. A few instances of difficulty, and a couple pieces aren’t completely firm, but it’s okay. The flower was awful. Getting all the petals together required more finesse than someone without telekinesis has. I still have no idea how I got them all together, which is why I immediately went for the tape. Then I got the other parts in and could not figure out the tightening rod in the center–it didn’t seem long enough. Once more I had to squeeze it in there. Finally, the butterfly stays on, but at the slightest touch it falls. It doesn’t actually snap in; it only stays on by sheer counterbalance forces.

So, again: metaphor for fragility of how life exists in just an extremely smooth spot between complete destruction. I glued the butterfly to the notches where it goes. It will not be flapping its wings to cause any storms.

Apparently my reviewing of 3D puzzles is now a recurring feature, ’cause I got more coming.

Oh, right, and by the way, this is a level one puzzle. That bird was level 2 and it was easier. This butterfly should be a level 5. (It only goes to 3.)

Hm, maybe I should actually put this up as a review on where I got it. There are currently no reviews…